Can Christmas be Saved? 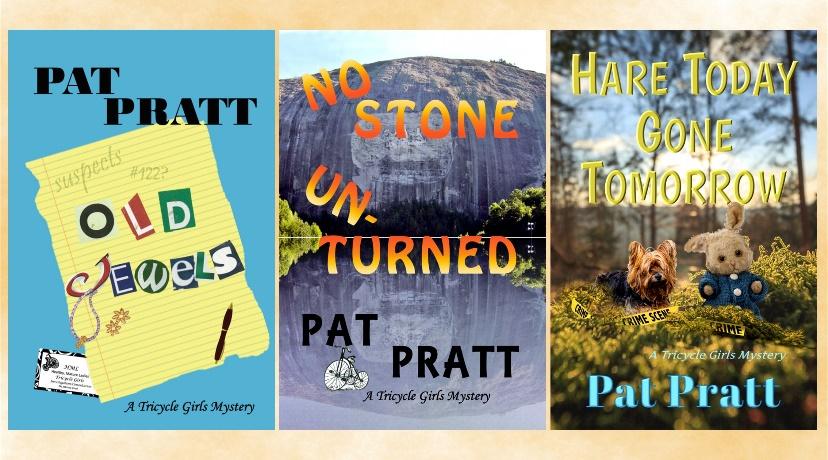 Pat Pratt is the author of the Tricycle Girls Mystery Series. Her cozy mysteries are about an engaging group of women living in a retirement center who manage to get embroiled in murder, theft and general all-around mayhem. On Amazon: https://amzn.to/3v0waAf

Pat also mentors’ local authors, sharing her expertise and talent to the members of our local Write-On Group. At this year’s annual Christmas party, Pat entertained us with her mystery about saving Christmas. Hearing it, I knew it was perfect for my December post.

It happened one Christmas (You can believe it or not)

when weather at the North Pole had been unseasonably hot.

Up there in Toyland the elves had been busy,

and as par for the season all was a-tizzy!

The halls had been decked with boughs of holly.

But, woe of woes … all was not jolly.

For, you see, what happens when weather is hot—

is that snow melts and turns into water. It’s true!

And Santa’s sleigh flies in the snow, not the dew.

His reindeer must have the snow to get started,

and then, after once having safely departed,

they fly through the air with the greatest of ease,

over mountains and houses and hilltops and trees.

They fly to the rooftops of girls and of boys,

Taking off from the rooftops is easy as pie—

just go to the edge and jump into the sky!

It matters not then if there’s warm weather, you know,

for it’s only when leaving the ground they need snow.

But now back at the North Pole, Santa’s mind was in muddles,

for all of the snowdrifts were turning to puddles.

And the runway he used for taking off on his trips

had melted till it was nothing but drips!

Santa pondered and fussed and he paced the floors.

Oh, how he hoped it would cool down a mite,

so the weather for Christmas would again be just right.

But as much as he worried, at the end of each day

the snow at the North Pole was still melting away.

for stepping in puddles, and splashing in sploshes.

And also, besides all the making of boots,

she sewed up for Santa two short-sleeved red suits.

For his usual suits, with long sleeves and fur trim

were, in the heat, much too warm for him!

“What good are these suits?” he said with a sigh.

“If the snow keeps on melting the reindeer can’t fly.

And all of the children, how unhappy they’ll be

to find, Christmas morning, no gifts under the tree.”

Santa fretted all day, and he paced in the hall,

‘til Mrs. Claus feared he’d get sick from it all.

So she summoned the elves to ask their advice,

and see if any of them could turn puddles to ice.

“But we’ll think of something. You can count on that!”

“Santa could take a boat,” said a toy-boat building elf.

“But we haven’t a big enough one on the shelf.

How about an airplane? Santa could fly it.”

So they asked Santa Claus if he’d care to try it.

But Santa said, “No! That’s my definite answer!

I just couldn’t go without Dasher and Dancer,

and all of my reindeer. It wouldn’t be right

to leave them behind on Christmas night!”

“I have an idea,” said an elf engineer,

“How we can send Santa and all his reindeer!”

He whispered his secret to all of the elves,

and immediately they started busying themselves,

cutting and sawing. What a hustle and hassle

was going on now outside Santa’s castle!

“What’s that THING they are building clear up to the sky?

How will that contraption make reindeer fly?”

Santa questioned and wondered, but all they would say

that THING would be ready by Christmas Eve.

Or that it could possibly help reindeer fly—

that contraption that went straight up into the sky!

At last came the day—the day for departing.

Santa Claus said, “I think we should be starting.

But how do we start? What makes us go?

We just can’t get airborne without any snow!”

The elves said, “It’s time to unveil our surprise—

this THING that is guaranteed to make reindeer rise.

Since you only need snow when leaving the ground,

it would seem that the one way to get around it …

is to leave from the roof of the castle. That’s why

we built this THING beside your castle so high.”

“What is it?” said Santa, who still couldn’t guess.

“Just load everything in it and up you will go

to the top of your roof. Who needs the snow?”

Well, it wasn’t the way that Santa liked the best.

But it was a solution, so he’d do it—he guessed!

Up, first, went the reindeer, eight of them all …

not counting Rudolf, ninth, and last of them all.

(They are very sure-footed, so they wouldn’t fall!)

Next went the sleigh, then Santa himself,

and every last toy from the toy room shelf.

This THING had worked fine, this elf-a-vator.

He’d have to be sure and thank the elves later.

they clip-clopped to the edge and jumped into the sky.

They’re off! They’ve made it! They’re on their way!

We’ll save this invention in case comes a day

when we’ll need it again. But we’re hoping, you know,

for Christmas now on we will always have snow.

But you can be sure, whatever the weather,

with Santa and his elves all working together,

there will always be Christmas, with all of its joys.

And so, Merry Christmas to all girls and boys.

Thank you, Pat, for allowing me to share your delightful Christmas story.

Pat Pratt can be contacted at: triciajunison@yahoo.com

If you have a question or a comment, please let me know. I’m always “On The Hunt” for new ideas.

Have a safe and happy holiday season.