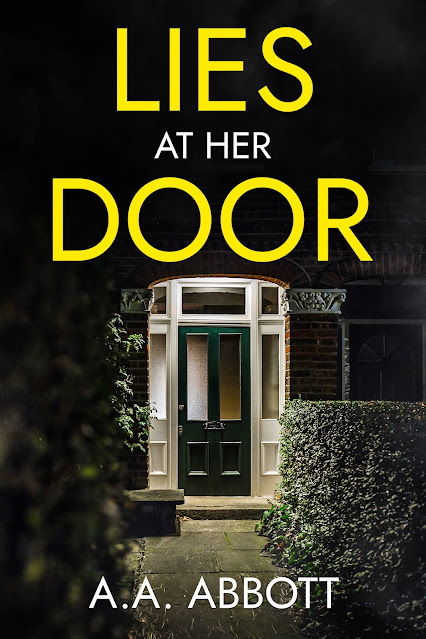 She forgot about her childhood friend… until his body is found under her garden. Can she prove she didn’t commit the decades-old murder?

Lucy Freeman struggles to find satisfaction in life. Trapped in the shadow of her rock star brother, the thirty-two-year-old craves more than her days at home caring for her terminally ill mother. But her routine takes a turn for the horrifying when a giant sinkhole collapses the earth outside their house and reveals a skeleton.

Shocked to discover the bones belong to a former member of her sibling’s band, Lucy’s worst nightmare comes alive when police suspect her of the killing. And as she turns to her dying parent’s diaries in a desperate search for vindication, she’s entangled in a dark and complicated truth.

Lies at Her Door is a heavy-hitting psychological thriller novel. If you like strong character growth, overcoming dysfunctional relationships, and revealing unexpected secrets, then you’ll love AA Abbott’s chilling whodunnit. 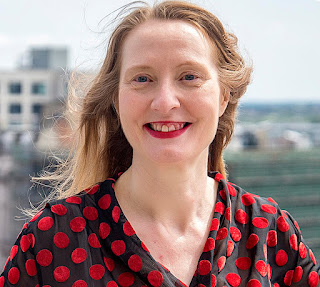 British crime thriller writer A.A. Abbott (also known as Helen Blenkinsop) enjoys escaping with an exciting and emotional read, and that’s what she aims to write too. Based in the city of Bristol in England’s beautiful West Country, she’s shared her love for the city by writing about it in her latest psychological thriller.

Lies at Her Door is Helen’s ninth book. She’s had help from readers on subjects as varied as police procedure, philosophy and music. She’s grateful to them and to editor Katharine D’Souza for making huge improvements to the story.

Like 10% of us, many of Helen’s family are dyslexic. While she is not, she wants her books to be enjoyed by readers with dyslexia and visual impairment too. She publishes her thrillers in a Large Print dyslexia-friendly edition as well as standard paperback and ebook versions. (You can also adjust the font on your electronic device to suit your needs.)

A member of the Alliance of Independent Authors, Helen likes speaking to book groups, business networks and social circles. She also has fun reading thrillers and short stories at live fiction events and on Zoom. If you’re a book blogger, litfest organiser, reviewer or simply adore books, she’d love to hear from you.

THE STRANGE CASE OF THE SECRET CELLAR

I live in the British city of Bristol. Other folk have done the same for thousands of years – there’s an Iron Age hill fort just a five-minute walk from my home. My house is nearly two hundred years old, a tall, thin terrace built in the early years of Queen Victoria’s reign. Although the yard is the size of a postage stamp, there is also access to a large communal garden.

The week before Christmas 2020, social distancing was a big deal in the UK. Outdoor gatherings were permitted, however, and local residents met for Christmas carols in the garden. They performed the actions to the ‘Twelve Days of Christmas’ with gusto, dancing and leaping about. We will never know if it had a bearing on what happened next.

I’m not a habitual drinker, but I make an exception for Christmas Day. It passed in a blur of alcohol for me, and also, it transpired, for a neighbour a few doors away. Let’s call him Kevin. At 10.30pm, about to sleep, I heard a crashing sound. Assuming an innocent explanation – perhaps someone, somewhere had dropped a pile of saucepans – I paid no attention. Kevin, I later discovered, rushed outside. The noise had been much louder for him. When he investigated, it was obvious why. A giant sinkhole had appeared at the end of the communal garden by his house.

Kevin phoned the emergency services. With some difficulty, he persuaded them that his Christmas had been merry, but he wasn’t too drunk to fail to notice a crater. To their credit, they were on the spot within an hour. The “sinkhole” turned out to be a collapsed cellar. In the morning, its brick walls and arches were clearly visible behind the wire safety fence that had sprung up around it.

The event was a gift from the writing gods, and too good to ignore. It became the basis of “Lies at Her Door”, with a Christmas cellar collapse suddenly revealing a skeleton.

In real life, there was no skeleton, but the crater raised more questions than it answered. No-one knew why there was a cellar under a garden. The builders were long-dead and their architectural drawings hadn’t survived. It turned out that the communal plot was riddled with cavities like a rotten tooth. A long-time resident remembered partying in one of them for the Queen’s Silver Jubilee (Elizabeth !! celebrated her Platinum Jubilee this year, 2022).

I mentioned the sinkhole to a shopkeeper friend. “They’re all over the city,” she said, pointing to a smaller one disfiguring the pavement two doors away. Indeed, the hole remains unrepaired and fenced off more than a year after the collapse. The local council, grappling with a tight budget and centuries-old infrastructure, has bigger problems. Part of an old road nearly fell into the river. A set of quaint Victorian steps up from the waterway is unusable thanks to a yawning void that appeared next to it.

It seems there are no certainties in life. Even the ground on which we stand isn’t as solid as we thought.

Read “Lies at Her Door” free with Kindle Unlimited, or buy it in ebook, paperback, hardback, large print or dyslexia-friendly print. Follow author AA Abbott on Twitter and Facebook, and find out more about her at https://aaabbott.co.uk/.

LIES AT HER DOOR by AA Abbott Book Tour Giveaway