Dating back to the 1930s and 40s from the infamous Benny Binion’s casinos, became the inspiration for Deadly Keepsakes. It started with a short article written by Edward Hertel, the Chip Detective. His article dealt with the poker chips found during the renovation of the Top O’ Hill Terrace museum in Arlington, Texas. In the 1940s, the Top O’ Hill Terrace was a popular restaurant and casino owned by the Dallas crime lord Benny Binion.

I contacted Mr. Hertel to obtain permission to use the poker chip image in my July On The Hunt article, A Mystery Shift. My phone call resulted in an unexpected bonus. Mr. Hertel offered to send me poker chips from Binion’s casinos he obtained during his investigation. I expected to get a couple of chips in the mail. To my absolute amazement, I found a container with nineteen original poker chips when I opened the package.

You can’t imagine my excitement. Who had held them, when and where? If only these poker chips, pieces of Dallas history, could talk.

The article is a fascinating true crime read about the battle to control the lucrative Dallas gambling syndicate in the 1930s and 40s. The images of two chips with the lightning bolts and arrow sparked a new inspiration for the next book in my Tori Winters Mystery series.

With Mr. Hertel’s permission, I am reprinting his article. Due to the length, I have divided it into three parts. Part Two will publish on Saturday, August 27, and Part Three on Sunday, August 28, 2022. So, stay tuned to the Mystery Review Crew website and my column, On The Hunt.

Rarely has a chip said so much with so little. The chips stamped “BHS” come from the state of Texas, and like the state itself, they hold a story that is bigger than life.

The hub mold chip from the Mason & Co was ordered in 1939 and sent to Sam Murray at Santa Paula Hotel in Dallas, Texas. With this information, deciphering the initials on the chip can be reasonably guessed – “S” for Sam Murray; “H” for Herbert Noble, Murray’s gambling manager at the Santa Paula; and “B” for Benny Binion, crime boss of Dallas and not‐so‐silent minority partner in the hotel’s gambling action.

But interestingly enough, the initials aren’t the only thing on the chips as the gamblers added a little flare to go along with the initials. With the benefit of hindsight, we are invited to interpret these designs and imagine that they aren’t just ornamentation, but are foretelling signs of times ahead.

Might the lightning bolts on the Mason chip be a mark of mistrust between the partners and a prediction of a coming storm? Perhaps the arrow through the center of the S‐mold was a sign of ill will and possible threats between the men. It’s impossible to know for sure what the motivations were behind the chip designs, but the guesses would be logically considering what was about to happen.

Within a year of the Mason chip order, one of the partners would be betrayed and assassinated and the remaining two would start a war with the winner‐take‐all prize of becoming the Dallas’ vice czar. The conflict put a city under siege, leaving a wake of chaos and dozens of dead gangsters.

In this fight for supremacy between gambling giants there could only be one winner and the stakes could not have been higher. The victor would reign supreme not only in Dallas, but would eventually become a gambling icon with his name immortalized in lights.  This is not just a story of a few chips but one about the genesis of a gambling legend and the measures he had to take to get there.

This is the story of… 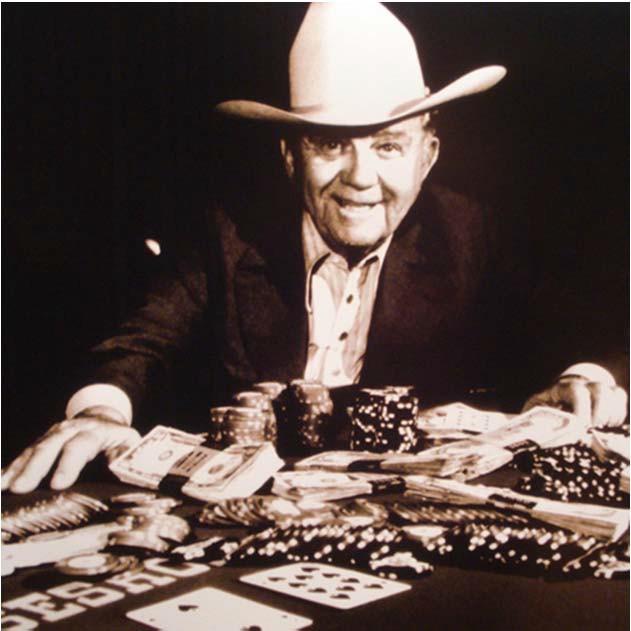 Benny Binion’s path towards underworld boss was anything but guaranteed. The sickly child from a small north Texas town barely survived childhood and his numerous bouts of pneumonia kept him home and both weak abled as well as uneducated. It was well known, even later, that Benny Binion was barely literate, but to underestimate his intelligence would be a mistake. Even though he wasn’t good with words, he was a master of numbers and odds.

Benny’s education in the real world started early when his father taught him the art of the horse trading business. He learned how to not get hustled, as well as a few tricks to get one over on the next guy. With his new found skills, Benny traveled to El Paso and tried to make a go of his new trade. His time there would be short, and much would be hidden in mystery as he was later hesitant to go into details about his time in west Texas. What is known is that it was here that he first dabbled in gambling, as well as some bootlegging, and spent some time locked up in the local jail. Whatever secrets Benny kept of his time in El Paso, he kept them close to his chest. Within a year of arriving, Binion called it quits and headed to Dallas.

Dallas, even back in 1922, was a larger city than Benny Binion had been used to and at eighteen years young, Benny must have felt like a small fish in a very large pond. With his newly acquired knowledge of gambling and his aptitude for numbers, Benny quickly found a place in the Dallas gambling underworld which was currently being run by Warren Diamond’s gambling syndicate.

Under Diamond’s tutelage, Benny learned the ins and the outs of running a gambling empire. Many of Diamond’s business strategies would follow Benny throughout his life. It was Diamond who taught Benny that there was room for more than one Warren Diamond, Dallas gambling boss gambler in town – as long as he was the top and got his proper cut. It was also Warren Diamond who would never refuse a bet, regardless of how much. Table limits were merely suggestions and a big bet was never refused. This would later become one of Binion’s claims to fame.

Within four years, Benny had become one of Diamond’s trusted employees. He had begun as a mere shill who steered gamblers into the games, but soon his ambitions were leading him into going into business on his own. With Diamond’s blessing (and 25% of his revenues), Benny opened his first craps game in 1926.

The following year would prove another milestone as Benny started his first policy game in Dallas. Policy, sometimes called bolito, was a lottery type game where gamblers bet on numbers that were picked in some random fashion. It was popular in the poorer neighborhoods because bets could be as little as one cent and the payoffs could be as much as six or seven hundred times. These small bets would add up, and policy would become one of Benny’s most lucrative, and therefore most heavily defended, businesses.

As the 1920s were winding down, Benny Binion was becoming not only wealthy, but powerful. His reputation for defending his policy territory was well known and anyone encroaching would be dealt with quickly and harshly. Through it all however, Binion stayed loyal to his boss Warren Diamond. It was no surprise then in 1930 when Diamond announced his retirement and handed over the keys to the Dallas underworld to Binion. Now, with no limits to his ambitions, Benny would make Dallas his own and a new era in gambling was born.

To Be continued in Part Two

Benny Binion and the Gambling Wars was originally published in the Casino Collectibles News.