Haven’t read Part 1 yet? Click here to get started.

Author and investigator Edward Hertel, the Chip Detective, takes solving mysteries to a new level. As gambling casinos all used distinctive poker chips, Mr. Hertel utilizes the chips as the starting point to trace the history of illegal gambling casinos that dates back to the days of prohibition.

In response to my question as to how long he had been researching casinos and poker chips, he said,

“Like most casino chip collectors, I started by just picking up a few from the casinos I visited. I became aware of the Casino Collectables Association, which was a growing organization of fellow casino collectors (it was an offshoot of the ANA coin collecting organization). It was at my first CCA convention that I met some collectors who specialized in what we call “illegals”, or chips from unlicensed, aka illegal, gambling clubs. The golden age of the Illegals started back in the Prohibition era and continued throughout the mid-1960s. (Although truly illegal unlicensed clubs still exist today.)

I found this history of illegal clubs absolutely fascinating, and for the most part, it is completely untapped history. Sure, the big names like Al Capone and Bugsy Siegal are well written about, but there are literally thousands of untold stories on incredibly interesting people and places just waiting to be discovered. I’m amazed that I can start with a simple name or address and uncover an entire story that makes most Hollywood movies boring by comparison.”

He further added, “I have a backlog of half researched stories from all over the country.  You really don’t know where you might end up next.”

Binion moved quickly to consolidate his power. He merged Diamond’s old partners with some of his loyal gangsters and formed what would later be called the Southland Group which operated out of the downtown Southland Hotel which acted as both a headquarters and gambling casino.

From the Southland Binion operated most of Dallas’ gambling. Binion had his own games in various hotels around town, but independent gamblers were allowed to run their own games – with permission of course. For starters, Binion would be given a 25% cut of all the action.  Failure to pay not only brought possible retribution from Benny’s gang, but also guaranteed harassment from the local police. Benny’s contributions to local law enforcement made life much easier for those on his team. From police to judges, gamblers friendly with Benny were given an easy time.

As the gamblers shared the dice action throughout Dallas, Benny still held tight his zero tolerance for competition in the policy racket. One of the first people to test this was Sam Murray, operator of a craps game in the Santa Paula Hotel (and the one who ordered the BHS chips).

Along with his manager Herbert Noble, Murray’s casino at the hotel had been a success for years. He was content to pay his 25% protection money and welcomed the partnership with Binion until 1938 when he decided to reach a little higher. It was then that Sam Murray seized control of the horse betting business and then made the mistake of moving in on Binion’s policy racket.

It was clear that threats were not sending a stern enough message, and Benny wanted to make an example of Murray to all the other would‐be competitors. On an afternoon in June 1940, Benny received a call to inform him that Sam Murray was leaving the Santa Paula Hotel, unarmed and unescorted. Benny dispatched his right‐hand man Ivy Miller to end the disagreement once and for all. Sam Murray, in front of witnesses, was gunned down in the street.

There was no question what happened. The police arrested Ivy Miller, but he would never see a conviction for the crime. He claimed self‐defense and the plentiful witnesses suddenly all came down with group amnesia. To everyone in “the know”, this was a gangland warning to stay away from Binion’s policy business.

The only question that remained was who tipped Benny off about Murray’s whereabouts? Although not known for sure, rumors swirled about Murray’s business associate Herbert Noble. He was usually in charge of protecting Murray, but on this day was nowhere to be found.

And then there is the unusual amount of apparent rewards that Binion handed Noble right after the murder. Once just the manager of the Santa Paula Hotel’s action, Noble was given the hotel’s game outright as well as other places around town. 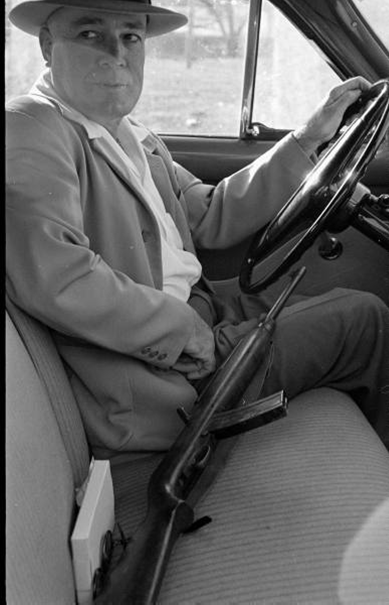 Regardless of how he became a gambling underboss, Noble was quickly starting to outgrow his shackles. He was coming in light on his 25% contributions and would be slow in answering inquiries. By the mid‐1940s, Herbert Noble was becoming more brazen, and Binion was ready put him in his place. For Benny Binion, there was only one response to disloyalty and it would need to the served quickly.

Chip ordered from Mason and Co by Herbert Noble (left) in 1935.

In January 1946, the first shots of the Dallas Gambling Wars were sounded when Herbert Noble’s car was riddled with bullets and he barely escaped with his life.

Benny would take the first shot, but in not ending it that night, he opened the door to years of bloodshed that would rock the city.

With this single action, Dallas was split between the two groups – Binion on one side and Noble on the other. The city’s underworld was forced to choose sides in an important life or death decision. First one side would lose a man, then the other in a circle of retaliation that never seemed to end. What was once a city of cooperation was now divided between the two warring factions.

The violence was ramped up to such an extreme that the police could no longer turn a blind eye. Too much property was being damaged and far too much attention was now focused on their city. Word went out that on January 1, 1947, Dallas would be closed to gambling. The city’s gamblers shuttered some of their more visible games, and drove the others underground.

With the tide changing in Dallas, Binion decided to wait out the gambling lockdown out west in Las Vegas. Before he left, he assigned his gambling empire to various people loyal to only himself. Even though he wouldn’t be running the day‐to‐day operations, he wanted to make sure his craps games, and especially his policy empire, continued to bring in a good cash flow.

But there was one piece of unfinished business Binion wanted to make sure got handled while he was away. He didn’t forget who brought them to this point, and he made sure the order went out – Get Herbert Noble!

While Benny Binion was enjoying his time in Las Vegas running the Westerner Casino, Herbert Noble was doing everything he could to just stay alive. In May 1948, Noble was ambushed while driving home. He took a bullet in the arm, but managed to escape.

In the following February 1949, someone was spotted messing with Noble’s car outside of one of his clubs. An inspection found a pack of explosives around the car’s starter. The newspapers dubbed him “The Cat” because of his number of lives. Little did they know this cat had many more lives.

TO BE CONTINUED IN PART THREE

Benny Binion and the Gambling Wars was originally published in the Casino Collectibles News. http://www.ccgtcc-ccn.com/vol30_4.pdf